Our heroes have waded through Dungeon, Battlements, Keep, and Court, and now they climb to the very highest pinnacle of Tour Toriel: the stone spire, convergence of ley lines, ancient holy site, and nexus of arcane energies.  The glowering purple tear in the sky floats here, just out of reach, and just about to end the world.

...unless our heroes do something about it.

The Shattered Spire above Tour Toriel is a full-featured adventure with action sequences, dramatic intrigue, and unthinkable horrors.  The adventure can be played in one epic session (4-6 hours) or easily divided into two to four shorter sessions.

THIS ADVENTURE IS STILL IN DEVELOPMENT AND NOT YET DOWNLOADABLE.

This campaign is a standalone Cortex game.  All the rules you need to play are included in this and the four previous adventures.

The Shattered Spire above Tour Toriel is the fifth and final adventure in the Ascent to Prime campaign, which teaches the mechanics of the Cortex Roleplaying Game using an epic megadungeon as its classroom.

The Shattered Spire focuses on the players and GM customizing their play experience to their liking, and also introduces Motor Pool?  Maybe?  Details are still fuzzy. 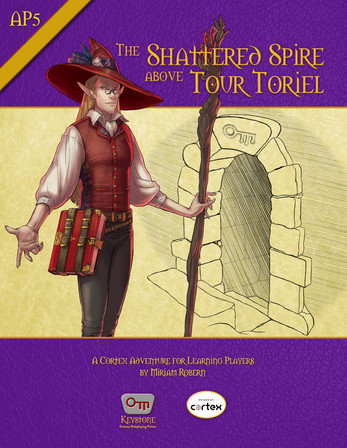